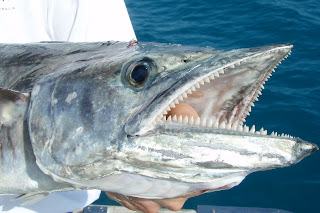 Had a great few days with Peds and Bernadette.   Although no marlin or sails we had a ball catching plenty of Spanish mackerel, a nice GT for Bernadette and usual smatterings of scaleys and mactunas.  Yesterday we did a charter with 8 personnel from the USS Blue Ridge.  I did find some good yakka schools though no marlin were raised, the day was about plenty of action which we found with some hot bites on the Spanish mackerel which are thick on most if not all of the grounds around Cairns at the moment.