The weather and fishing over the period was excellent with the roughest day being 20knots – no problem for the 48′ Viking “Gunrunner”.    I thought the fishing was top class. We fished a total of 8 days whilst there and caught a total of 19 fish, mostly stripes with a few blacks thrown in.   Some days the action was awesome, seeing over a dozen fish with coverups on striped marlin, biting everything in the pattern.    We had five doublehookups over the 8 days and 1 triple hookup, though catching them all especially on 15kg tackle is pretty challenging.

The tournament team of Jason, Katie, Kiara, Andy and Barry were well skilled and great fun to fish with.   I don’t think I’ve ever seen a 13 year old junior girl like Kiara, fish with such confidence and ability.   Katie Lee is not only an exceptional angler but also a dab hand at bait rigging and assisting Andy on the deck which showed through with her champion female angler award for the tournament.

There were 198 boats fishing the Interclub Tournament and the New Castle/Port Stephens Club once again took out the overall honours 5th year in a row with the team of Born Free, Gunrunner, Diversion and Balistic.  Champion boat tag and release was Broken Bay Vessel, Amokura followed by Born Free and Gunrunner in third position, with only 2 or 3 fish separating the 3 boats.   Looking forward to fishing again next year with the Gunrunner team.

Now back in Cairns and keeping an eye on Cyclone Ului which is currently off the Coast of Queensland.   The Top Shot now has a new teak deck and an exceptional job done by boat builder Dick Ward. 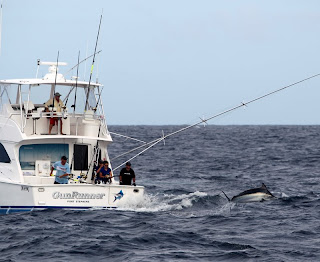 Donna and I head overseas on Monday to Costa Rica, Tropic Star Lodge in Panama and Florida for 3 weeks of fishing and catching up with friends.  Returning on the 14th of April and looking forward to a fantastic experience.