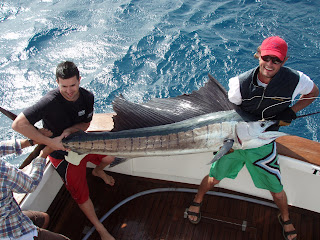 With one of the calmest winters in years, the weather along with the fishing has been sensational. The small marlin haven’t seemed to turn up as yet in any great number but almost everyday you go looking for them, you’ll encounter them. Sailfish have been more consistent in numbers than the marlin so far with good action on sails, averaging 30-40 kgs.

The mackerel action has been red hot, both on the reefy shoals and in the open areas around the bait schools whilst we’ve been billfishing. We’ve been fishing for these with trolled lures and gars as well as floating baits on the spinning gear

Water temperatures have been hovering between 23–24 degrees with good blue water pushing in through the openings. This trend should continue over the following months. Yellowfin tuna have also been surprise encounters in the openings with fish in the 20-30kg range, giving anglers a hard time on the light tackle.

This action should continue with some bigger black marlin (inshore granders) due to make an appearance in the coming weeks and with the heavy tackle just around the corner it all looks promising for a great beginning to another big marlin season.