Been awhile since our last post, though back in Cairns now.

After returning from Lizard Island, the dirty, funky water from North followed me down to the Cairns area shutting down the fishing along the edge for the last week of November.   Over the past 2 weeks we have been fishing wide of the reef,  mainly on the blue marlin grounds.

We caught a nice one for Dave Todd the other day and my biggest blue marlin caught in Australia at an estimated 850 – 900lbs.   A beauty and a tough one for Dave in the hot early afternoon sun.  It was a great capture and Pete got some fantastic shots.

With Christmas now just around the corner and most Southern boats now gone, the season is tapering down.  The water has cleaned up on the edge with still a few yellowfin, mackerel, sailfish and black marlin still around.

It was an excellent season with great numbers of quality fish.   As is the case with most seasons on the reef, there were hot and slow periods, with the good times making up for some weeks when the fishing was quiet.   We caught 65 marlin for the season with 20 fish over 750lbs.

Got the next few days off and looking forward to watching the Aussie beat the Kiwis in the cricket. 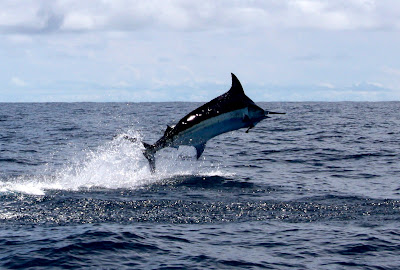