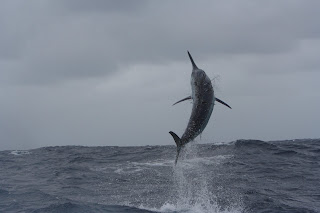 Another marlin season has come and gone with many highlights for the Top Shot.

I have just completed my final extended marlin charter for the season, with a few day trips ahead to take us through to Christmas.

It was a good season though had hard periods. It certainly wasn’t the slowest I’ve ever seen. A similar season to last year but a year where there was no El Nino or La Nina which according to Dr Julian Pepperell’s records, produce the exceptional fishing that have seen us catch 100 in a season.

One thing this year did provide was some exceptionally big fish for just about every boat that fished every month – Sept to Dec. Everyone has a tale of the monsters they saw, fought or caught and released.

Even on a quiet year, no place in the world comes close to Cairns. I think everyone expects us to have 100 fish seasons every year……

September and October fished well with consistent results for all charters with some really big fish caught.

Highlights for me were 2 great fish, one caught by Andrew Verner’s group in September and one caught by Tim Roache during early October. These one’s were of the XXL variety for first time anglers and a first marlin ever for Tim. Not sure how you follow on with starts like that.

Simon Atkinson’s trip in the middle of October was a great time for us all with big fish encountered almost every day. At number 5 Ribbon Reef, we raised one, that in my mind was one of the biggest fish I’ve ever seen…. though we failed to get a bite out of it.

Overall, November was a tough month across the fleet. The first week looked promising where we satellite tagged a nice 800lber on Linden Bank. After this though the fishing became “challenging”. It was a tough trip for Neil Riddel, Porky and Rick Pollock – though it was a pleasure to have guys onboard with such patience and a good understanding of the fishing.

There was good fishing to be had though 35 – 50 miles off the edge of the reef, weather permitting around the tuna aggregations – offshore in the Coral Sea.

I spent the last part of November fishing this area. Long 13 hour fishing days where you’d drift or hang on the parachute at night and start fishing from dawn till dusk.

We caught some great fish and lost a big one, with new ways to lose them …. getting tangled in long lines. We also caught small blue marlin, jigged some nice yellowfin tuna and boated a very large mako shark which was a hell off a battle in itself.

Early December trips saw us fishing offshore as well as on the edge around Linden Bank. We marked good fish consistently on the sounder though getting them to bite was a harder task. We satellite tagged another nice fish with the last charter of the season for Yogi and Hugo from Germany, estimated around 850lbs.

Both satellite tagged fish were in excellent condition, caught on circle hooks, short ten minute fights with excellent releases seeing the fish darting off strongly. It will be interesting to see the results and fingers crossed they retain the tags for the allotted times.

Overall we caught similar numbers to last year – 57 at this stage, with hopefully more to come before the New Year.

The Top Shot proved itself again to be an excellent game boat to fish from . Thanks to my crew (Brad & Pete) for all their hard work and to my clients (most of whom are regulars) for the great times and good laughs. It was another enjoyable season and I am already looking forward to next year.